Every year around December’s end, we gather together (or virtually on the internet) to reminisce about the last 365 days that have come and gone and wonder what it was we managed to do within that single year. For some 2018 was the best year yet, and for others, it offered nothing but struggles. Some people visited new places or made new friends, some learned a language, and maybe even went back to school. For Spook-Eats, it was a very exciting year, because, in June of this year, I decided to start out on this little adventure, and you weirdos decided to follow along.

So I’ve decided to look back on the last year (well, technically only six months, but who’s really counting?) and offer up some Spook-Eats Awards to my favorite haunted restaurants and ghost stories from around the country! Who will win? Who will fall? And who will reign victorious as the spookiest eatery around? No, we don’t have Neil Patrick Harris announcing the winners with a riveting song and dance… so just keep reading… 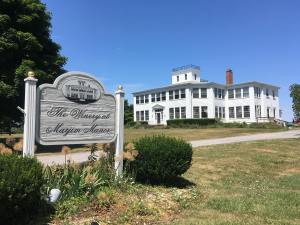 Best Spooky Legend: When you make it your mission to visit as many haunted restaurants as possible, you manage to hear some pretty good ghost stories along the way. Sometimes they’re from hundreds of years ago, steeped in mystery. Lovers are torn apart by life and death (or by jerks who just won’t let them live happily ever after). Sometimes there are battles or murders or even secret societies and cults, but my favorite creepy legend has to come from the Winery at Marjim Manor. According to the legend of Appleton Hall (the original name of Marjim Manor), nearly half a dozen people died within its walls and all of their deaths occurred on Thursdays around 3pm. The most infamous tale is that of Lewis Merritt, who was accidentally shot by his own father while standing at a pair of French doors… doors that supposedly still swing open on Thursdays at 3. From the Merritt family to the first director of the Buffalo Psych Center to even the Sister’s of St. Joseph’s dog, Duke, all their spirits have been sensed and seen within the winery, particularly on Thursdays at (you guessed it) 3.

Best EVP Captured: The most frustrating thing about Spook-Eats is visiting these locations during the day (read that as regular business hours). This makes holding any sort of investigation a difficult challenge, but every so often I’ve managed to sneak away (usually to the bathroom) and at least hold a mini EVP session. I’ve captured a strange burst at Johnny Mango World Cafe in Cleveland, Ohio and even a not so nice word at Hacienda in Mishawaka, Indiana. But the best one I managed to capture this year was at my rule breaker investigation. It may not have been a restaurant but it was an abandoned insane asylum so it definitely counts as strange and unusual. In October, Rolling Hills Asylum hosted a ghost hunt with Steve and Tango from SyFy’s Ghost Hunters. While in the basement, Steve was showing me around when I captured a woman’s voice saying, “Excuse me.” Do you hear it?

Best Drink: One of the perks of choosing to visit haunted restaurants and bars instead of orphanages and cemeteries, is that I get to enjoy more than one kind of spirit. I love a good cocktail (or three) and I especially enjoy them if they’re inspired by and named after the history and/or haunting of a location. This year, I’ve gotten to taste some pretty interesting liquid refreshments. From the Larkin About at the Roycroft Inn to Rockafella’s Bloody Mary complete with meat straw. Bridget’s Orchard was the best thing at Turner’s Seafood and the Winking Lizard has their “Great Big Draft List.” But for me, the yummiest cocktail I managed to nab this year has to be the Vanilla Alexander at Mercy Tavern. It was described to me as an adult milkshake and I could not agree more. If it wasn’t $12, I probably would have kept ordering them until they cut me off. 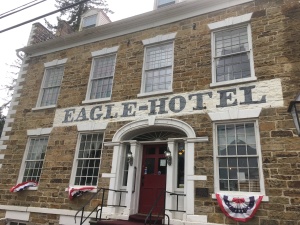 Best Ghost Story: You’d be surprised by just how many people are willing to talk about their paranormal experiences. For something that not everyone understands or believes in, it seems as if everyone I talk to for Spook-Eats, has a story to tell. From people hearing their names called at the Roycroft Inn to full-bodied apparitions at Dos on the Lake, everyone seems to have had some kind of experience that they are willing to share with me. But the best story came from Tracy, our waitress at Sugar ‘n Spice in the Eagle Hotel. She seems to be a magnet for paranormal activity from silverware disappearing on her to seeing a man in old-fashioned clothes watching her carefully while in the kitchen. But the best tale she told us was from a night when she was closing up just as she began to hear music playing. She followed the music up to the third floor which had once been a dance hall. The moment her hand touched the doorknob, the music stopped.

Best Food: At Spook-Eats, food goes hand in hand with ghosts. Think about it: everyone has to eat, so why not choose to dine at a place where you might get a little supernatural with your soup (totally stole that from Haunted Magazine)? There have been some stellar dishes I’ve had this last year including the Roycroft Inn’s shrimp and lobster bisque, Winking Lizard’s ribs and chicken wings (and that’s saying a lot coming from a Buffalo girl like me), and the meatloaf at the Eagle Hotel. However, there is one dish that stands out from all the rest, firstly because of its originality and secondly, because it’s so damn good: the Death Seat Burger Platter at the Old Canal Inn. This cheeseburger is unlike anything I’ve ever seen: slathered in mashed potatoes and cheddar cheese, jalapenos sprinkled on top, and then beer battered, and deep-fried. I’m not very brave when it comes to wacky food combinations but this is a burger that everyone needs to try whether you’re there for the ghost stories or just to fill your arteries. 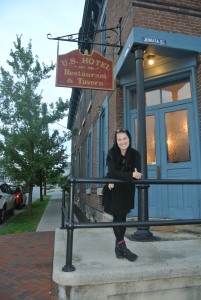 Best Scare Factor: Obviously, if I could, I would choose Rolling Hills Asylum because there is nothing creepier than wandering down Shadow Hall in the pitch black with paint peeling from the walls and your ears straining to hear anything in the old abandoned asylum. However, Rolling Hills is not a restaurant and it would be unfair to give it this honor. But to be honest, it’s hard to find restaurants out there that are both haunted and spooky. The creepiest restaurant I’ve ever been to is the Farnsworth House in Gettysburg, but unfortunately, I didn’t visit them this year, so instead, I decided to bestow this honor to the U.S. Hotel Tavern mostly for its stories and not necessarily its ambiance. Supposedly, ever since the current owners began working on restoring the second floor of their restaurant and banquet hall, supernatural activity has been stirred up to unbelievable levels. Construction workers and paranormal investigators have all fled from the U.S. Hotel Tavern, claiming to see a man with an ax, chasing them from the second floor. Sadly, I didn’t have nearly as good of an experience like that while I was there but you can’t ignore the spooky tales! 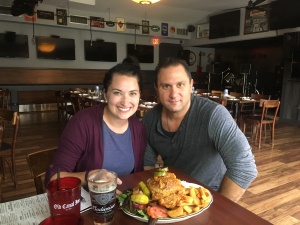 Best Haunt of 2018: Drumroll, please! This year, I managed to make it to 17 haunted restaurants, bars, and hotels searching for spirits of all kinds (as well as some cemeteries and asylums just for fun). Some places were better than I imagined, others fell a bit flat. Some had amazing food but bland ghost stories, while others lacked in the food department but wowed me with the paranormal activity. But there is one place that had a bit of it all, and managed to snag our Best Haunt award for 2018. Let’s hear a round of applause for The Old Canal Inn in Nutley, NJ! This place has got it all: a creepy ghost story and delicious food that won’t break your piggy bank. The legend of the Death Seat inspired the owners to create a unique (and delicious) dish that helps to add to the legend and keeps it alive into the 21st Century. Despite the fact that at least four people have died of heart attacks while visiting the Old Canal Inn and sitting in that cursed chair, people come from far and wide to partake in the Death Seat Burger… I guess if you can’t risk a heart attack by sitting in that evil little chair, you can live on the edge and see if you can survive the heart attack inducing burger. I survived! Will you?

Spook-Eats may not be able to afford a fancy trophy (yet), but behold the only digital trophy that matters: The Spook-Eats’ Best Haunt trophy: 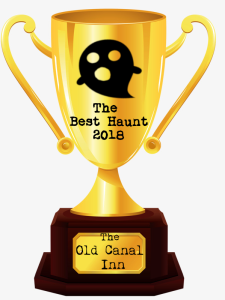 For having only been around for six months, I’d like to thank you all for following along in my strange and unusual adventures! Spook-Eats has been featured in Haunted Magazine, Rob’s Ghost Stories radio show, and Tickle Trunk of Horrors podcast. I can’t wait to see what 2019 has in store for Spook-Eats… if nothing else, I know there will be good food, good ghost stories, and good times had by all. Eat, drink, and be merry! For tomorrow we may die…