One of the most haunted hotels in America also happens to be one of my favorite restaurants in America complete with goober soup, the ghost of a sharpshooter, and a killer beer garden. 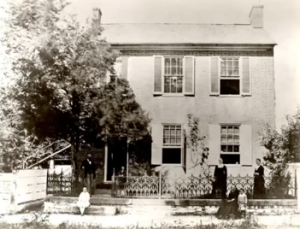 The History: The land the Farnsworth House now sits on was initially owned by Rev. Alexander Dobbin. The original house was built in 1810 with the iconic brick structure going up in 1833. During the three day Battle of Gettysburg, the house was home to the Confederates, including several sharpshooters in the attic. It is believed that one of their stray bullets killed Jennie Wade (the only civilian casualty of the battle).  Following the fight, the inn acted as a makeshift hospital, and today 135 bullet holes can still be seen on the side of the building. The inn has gone through several names over the last 200 years, and today it gets its name from the botched charge of Brigadier General Elon John Farnsworth shortly after the failed and infamous Pickett’s Charge. Farnsworth lost his life along with 65 of his men.

The Haunting: According to claims, at least 16 spirits haunt the Farnsworth House, all seeming to be intelligent. There is an 8-year-old boy named Jeremy, a former midwife, and Civil War soldiers. Some of the paranormal claims include the sound of heavy breathing, the smell of cigar smoke, and the sensation of someone tucking people into their beds at night. Several rooms at the inn (which acts as a restaurant and bed and breakfast) are incredibly haunted, the #1 hotspot being the Sara Black room. There are several tours offered by the Farnsworth House that will take you either down into the basement of the inn or up into the attic where the sharpshooters were stationed.

The Farnsworth House has mastered the creep factor when it comes to their inn. The building is perfectly preserved to make you feel like you’re walking through time the minute you enter. The staff is dressed in period clothes, and there is a heaviness to the place from the minute you first see the bullet holes in the brick wall. The ghost tours provided show that the Farnsworth House is not afraid to share its ghost stories and you are extremely likely to experience something paranormal, whether you’re having dinner, taking a tour, or spending the night. I experienced a cold spot as well as a door opening on its own while up in the attic. I’ve been to the Farnsworth House many times, now, and it is always on my “must see” list when I visit Gettysburg!

The Farnsworth House’s ode to history doesn’t stop at the decor and uniforms for the staff–the food is also authentic to 19th century America with little nods to Gettysburg’s own history. All entrees come with sweet pickled watermelon rinds (I’m not a huge fan of that), Jennie Wade bread (I am a fan of that!) with Adam County apple butter, and Southern Spoon Bread (a Southern dish a Yankee girl like me will eat over and over again). The menu isn’t too varied with only ten dishes to choose from. Like most haunted locations, the prices on the menu can be a bit on the higher side and portions aren’t enormous, so I wouldn’t necessarily take the kids there. However, the goober soup has been my favorite dish at the inn since I first visited in 2004, and I highly recommend it! If you can’t get reservations or just want to sit and relax, feel free to visit their beer garden complete with firepit and outdoor bar (if it’s chilly, they might bust out their hot apple cider and Fireball!).

Type of Experience: Hotel and restaurant