It may be easy to mistake Mount Airy for the charming town of Mayberry. After all, Andy Griffiths grew up here, and no doubt, used his childhood home as inspiration for the Andy Griffiths’ show. But hidden behind the adorable shops and friendly atmosphere of Main Street lies something otherworldly, and some might even say paranormal.

Old North State Winery was founded in 2002. The winery, itself, was built from scratch when founder Ben Webb planted 10 acres of vines on his family farm. Just one stop among 40 in the Yadkin Valley wine region, Old North State has found a home in a former hardware store with an unexpectedly violent past.

The building was built in 1885, but many believe the ghost story finds its origin in the early 20th Century. 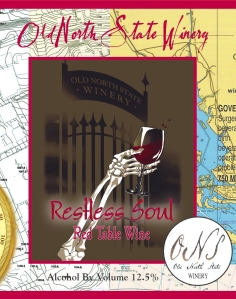 According to local stories, dynamite mysteriously went off in the store in 1926. It blew off the storefront and supposedly killed someone—a skeletal arm was found inside several years later.

No one was ever accused of the crime. Over the years, the mystery has fallen out of the public eye. That is, until you visit Old North State Winery.

You see, whoever was caught in the dynamite’s explosion has never left their final resting place.