Even after 100 years, London is still haunted by Jack the Ripper and his grisly murders.

We’ve already visited the Ten Bells, the pub where Annie Chapman (Victim #2) was last seen alive. So let’s check out some of the other places throughout London that Jack the Ripper was known to haunt.

Even though Mary Kelly (Victim #5) lived at 13 Miller’s Court, it’s Dorset Street that has the reputation as being “the worst street in London.” On the evening of November 9, 1888, Mary was brutally murdered by Jack the Ripper. Even after her death was announced, people reported seeing her on Dorset Street, leading many to believe that Mary’s ghost has been haunting the street literally since the day she died.

The body of Catherine Eddowes (Victim #4) was found in the square’s northwest corner, now known as Murder Corner. She was part of the double murder on the night of September 30th, 1888 along with Elizabeth Stride (Victim #3) who was found only an hour earlier. A local tradition states that every year at midnight on the anniversary of her death, the cobblestones in the northwest corner of the square glow red. 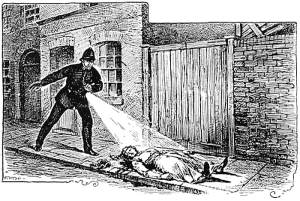 It may not be easily accessible now, but the site where Mary Ann “Polly” Nichols (Victim #1) was murdered has experienced paranormal activity for over a century. It seems to be more of a residual haunt, reenacting the murder on continuous repeat. A ghostly body has been spotted in the gutter near where Mary Ann’s corpse was discovered. This report dates back to 1895. Voices have also been heard along here and horses and dogs supposedly avoid the area.

This ghost story is based solely on myth and legend since we have no idea who Jack the Ripper was or what happened to him. But that doesn’t stop the stories. Supposedly, if you stand on the bridge on December 31st as Big Ben begins to chime midnight, you’ll see the specter of Jack the Ripper as he jumps off the bridge and into the Thames.

Sadly, my British Adventure is coming to an end. If you’ve missed any of my travels while across the pond, check them out right here!