A paranormal investigator is nothing without their equipment. Of course, our most important piece of equipment is our body: what do we see? what do we smell? are you cold? dizzy? The list can go on and on… but qualitative evidence can only go so far when documenting the paranormal. That’s where our toys come in handy!

I generally only use a digital recorder. As I’ve said before, I am obsessed with EVP sessions, and I find that I personally get the best results with just sitting in the corner of a room, asking questions (that came out wrong).

For those unfamiliar with EMF detectors, the basic idea is that it simply reads the electric and magnetic levels in the area around you. Usually, things like cell phones, microwaves, wires, and other electronics will give off a reading. And if the reading is too high, it can lead to people feeling uneasy, sick, dizzy, and they may even experience the sensation of someone watching them. It’s when you’re not near any of these electronic gizmos that many believe a ghostly presence is nearby.

It’s not an exact science, but it helps to have something document a possible haunting with data and numbers instead of just feelings.

Cambridge Labs has released a new EMF detector that can be used by anyone interested in researching the paranormal–it’s not overly expensive and it’s simple enough to use.

The EMF detector has a sleek and slim design. That might not sound that important, but it is my favorite aspect of the entire thing! While investigating, I always like to travel light, but with a camera in one hand and a digital recorder in the other, that idea gets shot to hell really fast. The Cambridge Labs EMF detector FITS IN YOUR BACK POCKET. Previous detectors I’ve owned have been these enormous monstrosities that don’t fit in anything other than a backpack.

Aside from its design, the detector is also very simple to read. The screen isn’t filled with numbers and data that muddle the readings for a layman (like myself). It’s easy to read the findings both up close on the backlit LCD screen as well as the green, yellow, and red lights that illuminate on the shaft depending on the reading. Anything below .4 stays green, while .4–4 turns yellow, and anything above 4 glows red. It helps everyone in the room see what the readings are without having to shout them across the space.

Another bright side: it’s rechargeable via a USB connection which means you don’t have to keep buying batteries! The downside: the fully charged battery lasts about 3-4 hours which means if you’re investigating all night long, you’ll need two or three of these.

I was able to use the EMF detector at the Stockton Hotel, a haunted restaurant and bar near Chautauqua Lake in New York. We found that in the “creepy” places like the attic and basement (places that electric wires and boxes are usually found), there was nothing–it stayed at 0 the entire time. However, while we were in the dining room, it was consistently red, jumping up as high as 54. We tested to see if it would spike near lamps and outlets, which did nothing but make it drop down to about 10.

If you think about it, if you were a spirit haunting a bar, would you hang out in the attic or basement, or where all the excitement was happening?

Now I’m not an electrician or a professional by any means, so I’m not exactly sure how accurate these readings are. When you first set it down, it does go a little crazy, spiking up into the red, but eventually, it does settle down, leading me to think that it takes a bit of time to get a decent reading. But it’s always exciting when you get a spike with no logical explanation… other than, you know, ghosts (because that is always logical for folks like us, right?)

All in all, it’s a nice piece of equipment to add to your collection. It won’t break the piggy bank, leading some to claim, “You get what you pay for,” but I prefer this detector over anything else I’ve used in a while. 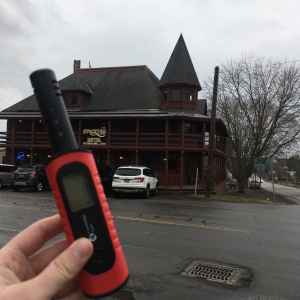 With how expensive some equipment is, this is a nice, cheap option that still manages to get the job done. With its slim design, it’s easy to carry with you on investigations. While it might not be completely accurate, it’s a nice addition to any paranormal investigator’s bag of tricks.

+Smaller than most EMF detectors

+ Rechargeable via USB/ cuts down on battery waste