In the 21st Century, it feels as though very little mystery is left in the world. Yet, cryptid creatures fill our legends and folklore–the Jersey Devil, the Chupacabra, jackalopes, and dogmen. There is one fearsome critter that managed to weasel its way into Paul Bunyan legends and acts as the symbol of a small town in northern Wisconsin:

According to legend, the Hodag was first discovered in Rhinelander, WI in 1893. It’s described as having the head of a frog, the grinning face of an elephant (not exactly sure what that looks like), short thick legs ending in claws, and a long tail with sharp spears at the end. Well known Wisconsinite, Eugene Shephard, supposedly captured a Hodag in 1896 and traveled around the state, showing the creature at sideshows and fairs (costing a whopping $0.10).

Sadly, aside from the enormous fiberglass Hodag outside the Rhinelander Area Chamber of Commerce, you’ll have a tough time tracking down a Hodag. Apparently, most of them (if not all) died out when the last of the all-white Bulldogs left the area (because don’t-cha-know, that’s all the Hodag eats). However, if you ever do cross a Hodag’s path, there are some things to keep in mind. 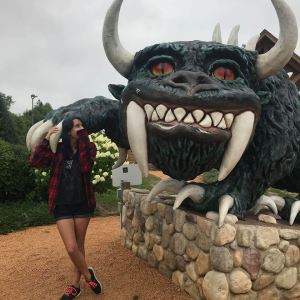 2. They can be killed with lemons, chloroform, and dynamite (one seems like a really simple solution, and two seem like a whole lot of fun).

3. You might be called upon to be a therapist for the Hodag. Apparently, it is very much aware of just how ugly it is and tends to start wallowing if anyone ever sees it.

Whether you believe in the Hodag’s existence or not doesn’t matter when you’re in Rhinelander. Everyone becomes a Hodag fanatic while visiting northern Wisconsin. So buy a beer, grab a handful of (squeaky) cheese curds, and make sure to snap a photo with the Hodag of Rhinelander… Admit it: he isn’t that ugly.