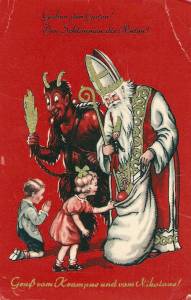 The Church may have tried to outlaw St. Nicholas’s demonic counterpart back in the 1950s, but over the last few years, Krampus and the subsequent holiday, Krampusnacht (Krampus Night), has experienced a renaissance.

No one is exactly sure where Krampus originated, though many anthropologists and historians suspect that he has pre-Christian roots. He has been a part of Central European Christmas traditions for centuries, usually working with St. Nicholas, punishing the naughty children. He is described as part goat, part demon with horns, cloven hooves, and the classic tongue hanging from his mouth. Traditionally, he was depicted with Ruten, bundles of birch branches (stories differ in whether he leaves the Ruten with the naughty children, or beats the kids with them). 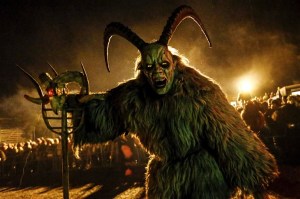 Krampusnacht is the evening before St. Nicholas Day on December 6th, and it is a bit more reminiscent of Halloween than Christmas. Men in villages and towns dress up as the horned demon, drink a bunch of alcohol, and chase after children in the hopes of scaring them in an activity known as Krampuslauf (Krampus Run).

Over the last decade, Krampus and Krampusnacht have both become a bigger part of the Christmas holiday in both Europe and cities in America (see if your city has a Krampus Parade… I know Philidelphia and Seattle have them!), marking the beginning of the Christmas season.