The mystery of Lilly Gray’s tombstone and the number 666 still haunts Salt Lake City and those who visit.

In an unsuspecting corner of the Salt Lake City Cemetery, there is a simple tombstone with primroses around the outside and the inscription that reads Lilly E. Gray June 6, 1881-Nov. 14, 1958. It’s a seemingly simple and beautiful tribute to a 77-year-old woman until you notice what’s written at the bottom of the tombstone:

According to Christian mythology, the book of Revelation in the Bible mentions the Beast and the number 666 refers to the Antichrist. So what could this unsuspecting grave of an old woman possibly have to do with such dark symbolism? In truth, no one really knows.

Several theories abound in regards to who Lilly Gray was, how she might have died, and what the inscription might mean on her beguiling tombstone.

Some people believe she may have died in a car crash on Highway 666 which runs through a portion of Utah. Though her obituary says she died of natural causes.

Others suggest that Lilly was somehow involved with Aleister Crowley’s cult in Salt Lake City. It’s no secret Crowley referred to himself as “the Beast 666,” and perhaps Lilly’s family saw her as a victim of his teachings. But some records suggest Lilly didn’t move to Salt Lake City until 1950 and Crowley died in 1947. 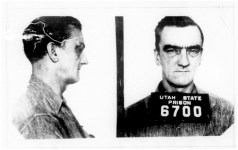 The most common theory infers that Lilly’s husband, Elmer Gray, was not mentally sound while in prison. Supposedly an anarchist, it’s believed that Elmer blamed the government for Lilly’s death. Could the US government be the Beast 666?

The mystery of Lilly Gray and her grave will continue to be just that: a mystery. But even 60 years after her death, paranormal enthusiasts and those merely curious seek out Lilly’s grave in the hopes of seeing it for themselves. If you’re brave enough, you can find it at the grave coordinates X-1-169-4-E.