Nestled on the edge of the Roche Harbor Cemetery on San Juan Island in Washington, is one family’s intimidating and haunting mausoleum. Dripping with Mason symbolism, it is the final resting place for the McMillin family and an impressive sight to both architecture junkies and paranormal investigators, alike.

John S. McMillin owned the lime works in Roche Harbor and was active in both local and state politics through the late 19th and early 20th centuries (he counted Teddy Roosevelt among his friends). He contributed his success to his religion, personal philosophy, and family life and so he wanted to immortalize his life’s work and beliefs in a grand and monumental way (pun intended).

As he neared the end of his life and death was imminent, he built the McMillin family mausoleum, or as it is sometimes known, the Afterglow Vista, in 1936.

The structure is filled with symbolism, some personal to McMillin and some to the Knights Templar and the Freemasons. As guests approach the rotunda, they must climb three flights of stairs–the first flight has three steps, which represent the three ages of man. The second flight of stairs has five steps, which represent the five senses. The last flight of seven steps represents the seven liberal arts and sciences.

Once on the raised platform, guests will find seven pillars holding up the domed roof. However, one of the pillars is broken (the westernmost one). This represents how death never lets us finish the work we have planned. There is no top on the domed roof, and that is intended to leave the monument open to the elements (some claim it was left out at the last moment because the project was running out of money and a bronze roof was expensive even back then).

The centerpiece of it all is a limestone table and a collection of chairs placed around it. Each chair represents a member of the McMillin family, complete with their names engraved on the back of their assigned seat and their ashes placed inside each of the chairs. There is one seat that is missing entirely (the one nearest the broken pillar), and it is said that this represents the one McMillin son who turned his back on the family religion.

Interestingly enough, it seems as if the McMillins aren’t the only ones that reside at the mausoleum. John McMillin’s personal secretary, Ada Beane, is also buried in the mausoleum along with the family she dutifully served for years. However, her cremated remains weren’t brought to the mausoleum until the 1950s… and that is when some pretty interesting things started happening at the Afterglow. 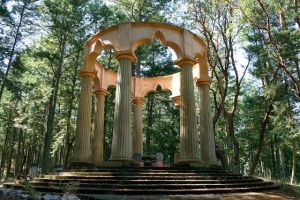 According to stories, blue lights have been spotted and photographed hovering above the chairs at the table. People claim to hear voices in the middle of the rotunda when no one else is around. On rainy days, it seems as if no rain falls on you when you stand underneath what would have been the bronze roof. And those who are brave enough (or foolish enough) to sit in one of the seats claim to experience an uneasy feeling as if they are trespassing, and some even claim to feel hands on them, pushing them off the chairs. And according to legend, it is said that as the sun sets on the mausoleum, shadows begin to appear around the table. One can’t help but think that the McMillin family is meeting once again to enjoy dinner in (you guessed it) the afterglow.

The Afterglow Vista is located in the Roche Harbor Cemetery and can be found at 664 Afterglow Dr, Friday Harbor, WA 98250.

If you find yourself on San Juan Island, venture to the Afterglow Vista and send us your photos and thoughts! Have you visited the McMillin family mausoleum? Is it bucket list worthy? Let us know what you thought in the comments below!