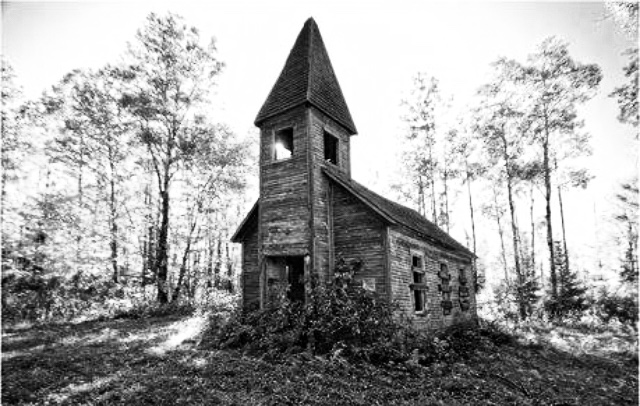 If you’ve ever lurked in the dark corners of Facebook or Pinterest, then you’ve probably seen the image of an old dilapidated church in the middle of a thick forest with a story that is far more frightening than its facade.

According to the internet (which we know is always true), there is a church nestled somewhere in the state of Minnesota that was forced to close down after a few botched exorcisms. When the exorcisms didn’t go according to plan, the possessed would be locked in the basement and left alone.

Sounds like something out of a horror movie, right? Well, you can’t believe everything you read on the internet… at least not entirely.

This church really does exist, but it’s actually in Wisconsin and not Minnesota. It is the Estonian Ev. Martin Luther Church in Lincoln County. It was built in 1914 and was the first Estonian church in America. However, by the 1950s the Estonian population in Lincoln County died down, and the church entered into a state of disrepair. Today, the Ev. Martin Luther Church is working together to restore the church to its former glory.

Fans of the supernatural might be disappointed that this viral ghost story can be considered debunked. However, this is a scary story that could very well be true.

At the time of this church’s establishment (and even well into the 20th Century), many people considered those with mental illness to be possessed by demons. Exorcisms were performed and when the victims weren’t miraculously healed, they were locked away–maybe not necessarily in a basement but some asylums out there were just as bad… if not worse.

So what’s the real scary story, here? Ghosts and demons taking over an abandoned church or the horrible things humans do to each other?