2019 has come to a close and this has been one hell of a year for Spook-Eats from trips to hunts and beyond!

Over the last year and a half at Spook-Eats, I’ve realized that focusing on the dead has made me really appreciate this wild adventure called life. In 2019, Spook-Eats celebrated its first birthday. But there were a whole lot of other exciting moments that happened in the final year of the decade. So let’s look back on my top moments with Spook-Eats to celebrate 2019 and ring in 2020!

I know it’s sad to admit, but 2019 was the first time I ever visited one of the most haunted places in all of Western New York: Iron Island Museum! This former funeral home turned local museum is a hidden gem in Buffalo, and I’ve managed to create a lovely friendship with Linda, the owner of Iron Island Museum. Since that first ghost hunt (check out my evidence here), I designed an escape room for them, spent an afternoon there all by myself (locked in), enjoyed their Haunted Food Truck Rodeo, and their Haunted Happy Hour. Linda and I are planning an author event there for the new year, so stay tuned!

9. Moonshadow: the official mascot of Spook-Eats

On March 31st, Mr. Spook-Eats and I made our house a home by bringing home an itty bitty baby black cat from the Buffalo Animal Shelter. She’s a troublemaker with a ridiculously long tail and sings like she’s an opera prima donna. All things spooky need a good old fashioned black cat and Moonshadow does just that. If you follow Spook-Eats on Instagram or Facebook, you’ve definitely seen her before. 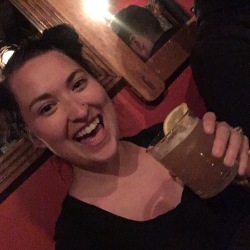 In May, Mr. Spook-Eats and I went to the Big Apple with his family to show them all the sights of NYC. Of course, while we were there, we had to check out at least one haunted place and that ended up being Fraunces Tavern. Having just celebrated its 300th birthday this year, Fraunces Tavern is the oldest standing structure in all of Manhattan with some pretty impressive claims. To hear all about them, check out my write up on them right here! All you need to know is their happy hour includes fresh oysters for only $1…

7. Signing the Wall at Graestone Manor 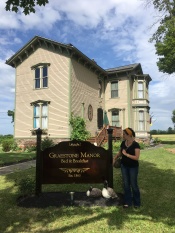 Now it’s a tradition at several haunted locations that those who dare to enter a certain section of the house or those brave enough to spend the night can leave their mark on that location by signing their name on the wall. While researching for the Haunted Atlas of Western New York, I got to meet the incredible Heather who owns Graestone Manor. After a few minutes spent in the basement, I was given the honor of signing the stairwell leading down into the basement. My handwriting is horrific, but it’s there! See if you can spot it the next time you visit Western New York’s most haunted B&B. 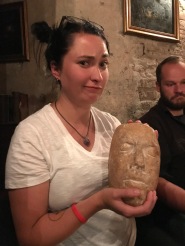 The big family adventure for Spook-Eats took us to England, Scotland, and Wales… and what an adventure we had! The history on this island is long and deep with pubs dating back to the 12th centuries (and sometimes those aren’t even the oldest ones)! This trip brought us to the oh-so haunted Cavern Club and Penny Lane in Liverpool, the Drover’s Inn near Loch Lomond, Greyfriar’s Kirkyard and the Edinburgh vaults where we got to hold the death mask of William Burke, and even the Ghost Merchants of York. It was a sweeping three-week adventure and I can’t wait to return!

I’ve been writing for Haunted Magazine almost since I began Spook-Eats, so when I found myself in the same country as Mr. Haunted Magazine, himself, you can be darn sure I made time to visit. If you can’t tell from his tweets and bits scattered throughout Haunted Magazine, Paul is one of the most genuine and caring gents in all of the paranormal. Meeting him wasn’t just a highlight of my British adventure, but my entire 2019!

I may not have won (or even came close for that matter), but to be nominated for a HiggyPop Paranormal Entertainment Award was amazing in and of itself. On Halloween night, I noticed the nomination over on Twitter and the excited panic began! I was up against some other amazing Paranormal Bloggers (including a fellow Haunted Magazine writer), and while I didn’t win, it did make me want to try harder here on the blog and maybe get a bit closer to winning next year!

This was my very first event with Ghosts N’at as well as my first time visiting Hotel Conneaut. Having grown up attending the amusement park over the years, I always saw the hotel in the distance on the shores of the lake, but never managed to get inside. I snuck away with Mama Spook-Eats for an overnight investigation of the hotel, and we captured some incredible evidence including phantom knocks caught on recorders and several interesting SB-7 sessions. Ghosts N’at was a great group to investigate with and I’ll definitely be keeping my eye on them in the future!

Believe it or not, I had never been to a paracon before November of this year–not as a patron and certainly not as a vendor! The Southern Ontario Western New York Paracon took place in one of the most haunted buildings in all of the Niagara Frontier. It was an honor to be part of their very first conference and I’m hoping to return next year (and maybe even give a talk if I build up the nerve). 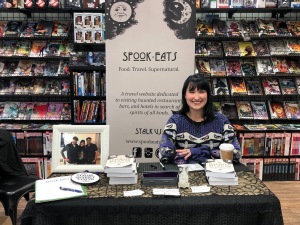 As if anyone is shocked to see this on my list of 2019 highlights! My very first book was published in November and it has already sold 200 copies! We’ve had one completely sold-out event in Chautauqua and one nearly sold-out event in North Tonawanda. Books have flown off the shelves at the haunted Ghostlight Theatre as well as Iron Island Museum and Paranormal Oddities (don’t worry… more is on the way)! The Haunted Atlas of Western New York is part ghost story, part tour guide. With over 130 haunted places (and some cryptids for fun, too), it was such an adventure to write and I hope you love reading it. Complete with coordinates, walking and driving tours, and even a spooky bucket list, this book encourages you to get off the couch, turn off the ghost hunting TV shows, and find the paranormal for yourself.

2019 has been a whirlwind of a year and 2020 is already filling in with fun events at conventions and libraries. A second Spook-Eats book is on the way as well as a few other surprises.

Thanks for going along this crazy journey with me.