Princes, and queens, and bears, oh my! I’m spending the day at one of London’s most famous attractions: the Tower of London.

The Tower of London has been a part of London since the White Tower was constructed by William the Conqueror in 1078. Throughout history, it has been a royal residence, an armory, a mint, and, of course, a prison. The Tower was a jail for over 800 years from 1100 until the mid-20th Century. It’s from these tumultuous years of torture, murder, and executions that the ghost stories stem from.

The most famous ghost is that of Henry VIII’s doomed second wife, Anne Boleyn. Arrested for treason, adultery, and incest in 1536, Queen Anne was executed on the Tower Green by beheading. Today, visitors to the Tower report seeing the tragic queen in or near the Church of St. Peter ad Vicula where she is buried. She has also been spotted near the White Tower, sometimes clutching her severed head under her arm. 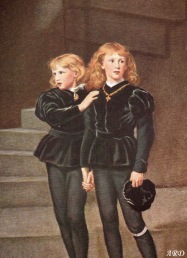 It seems tragedy and royalty go hand in hand at the Tower of London. Another famous tale comes from two young princes who were murdered while staying in the tower. When Edward IV died in 1483, he left behind his heirs in the form of two sons aged 12 (Edward V) and 9 (Richard of Shrewsbury). The boys were placed in the care of their uncle, Richard III, and mysteriously vanished from the Tower. For years it was suspected that Richard had the boys murdered so he would be crowned king. Evidence to support this accusation was found in 1674 when the bones belonging to two children were unearthed during renovations. Since then, examinations have determined that some of the bones were animal, so there is no hard proof that these are the remains of the two princes. Either way, the bones were buried in Westminster Abbey, and the ghosts of the two boys are still spotted cowering in a corner in the Tower of London.

One of the more fascinating claims from the Tower comes from the menagerie that was once there. In 1235, Henry III was presented with three leopards by the Holy Roman Emperor Frederick II (they were more likely lions according to historians). So began the royal zoo at the Tower of London. The leopards/lions were joined by a polar bear in 1252 and an African elephant in 1255. The menagerie remained open until the animals were finally sent to the London Zoo in Regent’s Park in 1835. Today, people still report hearing the sound of lions roaring and monkeys howling. A guard at the Tower said that the apparition of a bear charged him and vanished only when he stabbed the beast with his bayonet.

Perhaps the most grisly ghost story comes from the death of Margaret Pole, the Countess of Salisbury. A staunch Catholic, her death was ordered by King Henry VIII, and she was held in the Tower of London for over two years. When the day of her execution finally arrived, things did not go as planned. According to legend, the Countess of Salisbury fled from her executioner, forcing the man to run after her, swinging his ax. Her execution was drawn out, and eventually, she was hacked to death. It is said that her gruesome death is replayed each year on the anniversary of her death (May 27th). Visitors to the Tower report seeing the Countess running for her life and people hear the sound of screams and wails throughout the Tower Green.

These are just a few of the many tales haunting one of England’s oldest castles. Tours are available every day from the Beefeaters, and on occasion, ghost tours are offered as well.