People grieve in different ways. Sometimes you get a tattoo of a loved one’s effigy and sometimes you keep your dead husband’s heart in your desk. 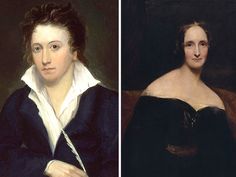 Mary Shelley, mother of science fiction and creator of the masterpiece, Frankenstein, had a life that was wrought with misfortune. Even after falling in love and marrying Percy Bysshe Shelley, her bad luck didn’t stop.

In 1822, the English poet drowned at the age of 29, leaving Mary with a lifetime of heartache and sorrow. His body was cremated, but strangely enough, his heart did not burn. Eventually, the young poet’s heart was given to Mary Shelley. Instead of burying the heart with the rest of his remains, she placed it in a silk shroud and kept it with her everywhere she went for the rest of her life.

When Mary Shelley died in 1851, the heart was discovered in her desk drawer, wrapped in one of Percy’s poems. But it wasn’t until their son, Percy Florence Shelley, died in 1889 that the heart was finally placed in the Shelley family vault. It is still there today in St. Peter’s Churchyard in Bournemouth, England, along with Mary’s remains, Percy Florence and his wife, Jane, as well as Mary’s parents, William and Mary.

Despite the fact that Mary Shelley is considered to be the mother of horror and just as tortured as her tragic Victor Frankenstein, it would appear she felt a love so strong and so deep, that it lasted well beyond death, even if it was a bit on the creepy side…