Who says cemeteries have to be drab and dreary? Not in Alabama! 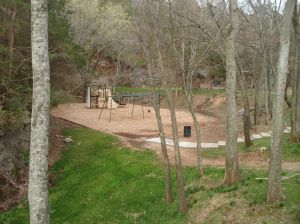 Alabama’s Maple Hill Cemetery is the oldest and largest graveyard in the state, and it is also home to the infamous Dead Children’s Playground. It seems like an odd place to put a cemetery–sure, it’s peaceful and quiet, but it’s also surrounded by graves. But locals have fought to keep the playground in the middle of the cemetery, and the local government has even gone ahead and updated it over the years! But they’re not keeping the playground nice and shiny for the local children, but rather, the ghost children that haunt the graveyard.

According to legend, there was a wave of child abductions in the area back in the 1960s, and most of the missing children didn’t survive. Their bodies were found at (you guessed it!) where the playground now sits.

Paranormal investigators flock to the playground in the hopes of capturing evidence of a haunting. There are claims of swings moving by themselves, the sound of children laughing and singing, orbs of light flying through the jungle gym, and even ghostly apparitions of children.